Calculate How Much You Can Save, and Which Programs You May Qualify for in 59 Seconds Online

It was a new day in Kevin Freeman’s life when he was called by Instant Tax Solutions (ITS) and told they had been successful in eliminating his $241,000.00 federal tax liability.  Not only was Kevin not liable for the taxes, he did not have to pay the $16,931.00 accrued interest, nor the $62,400.00 assessed in penalties.   In addition, the IRS sent him $10,032.23 returning his withheld tax refunds and personal payments that had been applied to his erroneous tax debt.

In 2007, when Kevin was living with his parents and sharing a room with his son, he was notified by the IRS that his 2007 tax refund of $600.00 was being applied to an outstanding 2001 assessed tax liability.  This was his first notification of the 2001 tax debt.

In 2008, Kevin’s financial condition improved greatly.  He had a well-paying job and was on his own.  When he filed his 2008 tax return, the IRS again withheld his tax refund….this time $8,000.00….and applied it to his 2001 tax debt.  In good faith, Kevin continued making monthly payments to the IRS for the 2001 tax debt even though he had informed the IRS of a probable error.

After many frustrating attempts to get the IRS to investigate what he believed was a misunderstanding, Kevin contacted a tax relief agency he had seen in a TV commercial.  He paid them an initial $4,000 with a promise of an additional $3,500 to come.   It became apparent after nine months with no return calls or up-date, this agency was not resolving his tax situation.

By June, 2009 the IRS had placed a lien on his home.  Kevin decided to hire another tax relief agency and start over.  After investigating company performance and integrity, he selected Instant Tax Solutions.  With the first call, he was put at ease by ITS staff and advised what the solution would be.  Kevin states “I was simply guided and helped through my tax problem until the lien was lifted off my home and all money plus interest was restored to me”.

“It doesn’t get much better than that”, Kevin claims.  “Instant Tax Solutions was without a doubt my life saver in the tax situation I had with the IRS”. 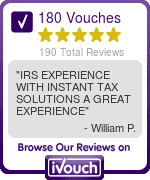 "The entire staff was very helpful and courteous through the process with no gimmicks."

The experience was a painless one with no hassles of hoops to jump. I had a debt of $16,000.00 and ended up paying $1,700.00. They handled everything from start to end with a very positive resolution. The entire staff was very helpful and courteous through the process with no gimmicks. Keep on with the GREAT work.

I just want to say what outstanding service I received from Instant Tax Solutions. They helped us through a very hard time in our lives when we needed it most. We can’t thank them enough for all their hard work and dedication. They truly are the best in the business at getting people out of Tax troubles, and we would refer them to anyone that are having hard times and in need of help from the IRS.

"...made me feel comfortable working with them. A burden has been lifted from my shoulders."

I had ten years of taxes I hadn’t filed. I was really nervous and didn’t know what to do. I checked the IRS website for tips on selecting a company. Instant Tax Solutions had a good rating and made me feel comfortable working with them. A burden has been lifted from my shoulders. Thank you Instant Tax Solutions!

I had a very serious tax problem, I was basically looking at the end of my life as I knew it. I called Instant Tax Solutions and within 3 days my levy was released and the monthly installment agreement was far better then I could have ever hoped for.

I owed the IRS $160,000 in back taxes. I had a wage garnishment and my case was assigned to a Revenue Officer. I did not know what to do. Instant Tax Solutions was able to get my garnishment before my next paycheck. When all was said and done, they saved me over $100,000.

"...but your confidence and expert advise eased that feeling"

I’ll admit I was a little reluctant because I didn’t know anything about Instant Tax Solutions, but your confidence and expert advise eased that feeling. Within 24 hours of retaining your services and giving you the requested information my wife’s wage garnishment had been STOPPED. What a relief!

"ITS was quick to respond and resolve my issues."

Great operation. Professional, knowledgeable and accommodating. Couldn’t have imagined a better experience, considering the situation. ITS was quick to respond and resolve my issues.

"I would highly recommend them to anyone that needs help!"

I called to discuss some serious tax issues and from my very first phone call, this team was terrific. They were courteous, professional and quick to deliver. Instant Tax Solutions far-exceeded any expectations that I had. They turned our situation around very quickly. I would highly recommend them to anyone that needs help with the IRS.

"Within 48 hours of contacting ITS, the levy was released..."

I received an IRS notice of a levy on my wages. Boy, was I scared. Within 48 hours of contacting ITS, the levy was released and now ITS is helping me to get caught up on unfiled returns. Thank you ITS!

"...you guys were simply great! Can't thank you enough."

This was the free consultation! Instant Tax Solutions spent over half an hour with me during my consultation. I was so impressed that my husband and I decided to sign immediately. From filing my back tax returns to settling my debt to the IRS and state of California, you guys were simply great! Can’t thank you enough. You guys are doing my taxes next year for sure!